A recent New York Times article reports that Italy’s Court of Cassation has overturned the acquittal of Amanda Knox for the murder of Meredith Kercher.[1] Although Schneps and Comez acknowledge that the Court has not yet publicly explained the motivations behind the ruling, they suggest that the failure of the judge to understand probability is the reason for overturning the acquittal.  They report that the judge refused to allow a re-test of the knife with more recent DNA analysis techniques in 2011, the year of acquittal.  The reasoning of the acquitting judge was reported to be “If the scientific community recognizes that a test on so small a sample cannot establish identity beyond a reasonable doubt, he explained, then neither could a second test on an even smaller sample.” 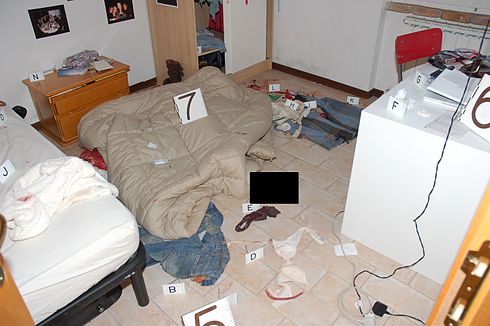 (Pictured above: The room where Meredith Kercher, the 21 year old British university exchange student from South London was found)

Schneps and Comez argue that repeated testing will determine accuracy just as flipping a coin will determine error if a 50/50 ratio is not found after many trials “whatever concerns the judge might have had regarding the reliability of DNA tests”.

However, the reasons for doubting the reliability of the DNA tests do bear on whether re-testing the samples could provide valid information about DNA matches.  The report of the court-appointed outside experts in DNA analysis, Carla Vecchiotti and Stefano Conti[i], analyzed all the DNA matches submitted by the forensic scientist for the prosecution and concluded that only one was based on sufficient DNA to constitute a match.  This sample was the DNA of Amanda Knox on the handle of a knife; however, the blood of the victim was not verified by the experts to be on the knife blade.

The conclusion of the technical consultant for the prosecution that the victim’s DNA was found on the knife blade was rejected by the experts for many reasons including inadequate analysis of low copy number DNA and the possibility of contamination from analyzing the specimen in the same workspace as samples of the victim’s DNA.  International standards for the validity of interpreting results from DNA amplifications were not met with these samples.

The experts were asked to determine whether they could re-test any of the samples and they did test several specimens to determine the quantity of DNA recovered.  They concluded that no samples recovered sufficient DNA to allow them to proceed to amplification of the DNA because the amount recovered was less than required for reliable results according to international standards.  In addition, the experts criticized the management of the crime scene for failure to control access to prevent the contamination of objects with blood from the victim. 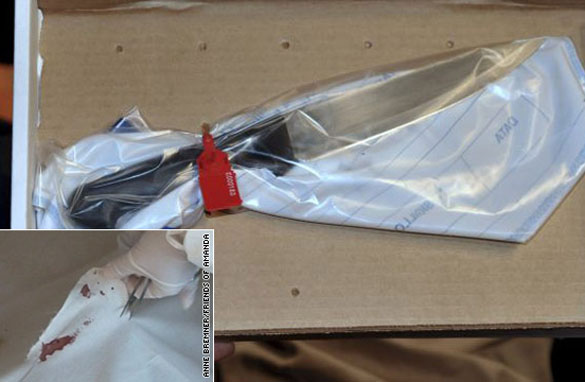 (Pictured above: The knife found in Raffaele Sollecito’s apartment)

Analyzing a poor quality specimen can be compared to tossing a coin in such dim light that heads cannot be clearly distinguished from tails and the shadows must be ‘interpreted’, subject to bias of the expected results.  Why continue tossing the coin when heads cannot be distinguished from tails beyond reasonable doubt?  A better quality test is needed, not more repetitions.

The judge’s comment that the samples are now “even smaller” indicates his understanding that each attempt to remove DNA from the specimen reduces the amount of DNA remaining on it.

The issue seems to be whether techniques have improved in the recovery and analysis of DNA to allow accurate analysis on the small amounts remaining on these specimens. Even this argument does not address the issue of possible contamination.  However, until the Court of Cassation releases its reasoning for the ruling, it seems to be premature to conclude that the judge erred because of his lack of understanding of probability.

Dr. Carrie Valentine graduated with a BA in Chemistry from the University of Oregon-Eugene. She was conferred her PhD in Biochemistry in 1975 at the Massachusetts Institute of Technology. She performed her post doctoral studies at Montana State University, Bozeman and the University of California, Davis. She formally retired from academic life in 2008. She is currently part of the Online Faculty for Grand Canyon University, Phoenix, AZ. From 1997 to 2008, she served as a Research Microbiologist, Division of Genetic and Reproductive Toxicology, National Center for Toxicological Research (NCTR), Jefferson, Arkansas. From 1992 until 1997, she was a Staff Fellow at the Division of Genetic Toxicology, NCTR, Jefferson, AR. From 1990 until 1992, she was an Assistant Professor of Pediatrics at the University of Arkansas for Medical Sciences, Little Rock, AR. She has lectured numerous times as well as published several peer review articles.