In my lecture yesterday at the OACDL annual OVI conference, I had the task of presenting on “What you need to know about blood.” I had 33 minutes to do so. What can you teach people in 33 minutes on this deep subject? I tried to impart just two thoughts:

It was this last slide and only slide on the subject that caused a stir among the 300+ attendees. I spent no more than 4 minutes on it including answering one question. This slide seemingly created the most buzz from my lecture. What I had taken for granted and universally well-known seemed to be not well-known in the defense and prosecution community. (Yes, there were prosecutors in the seminar and kudos for OACDL for allowing them.) The ignorance of this important but not widely known concept was confirmed in the private breakout meeting of about 35 to 40 judges that were in the Judges & Experts Panel Dialogue where I was asked about this. I expanded upon it at the time.

DUID result: Ethanol is a drug, but it is not a DUID result. By DUID result, I mean results other than ethanol that is found in biological samples.

Zero order kinetic elimination: Ethanol is governed by this pharmacokinetic principle. “Elimination of a constant quantity per time unit of the drug quantity present in the organism.”

The plasma concentration – time profile during the elimination phase is linear (Fig. 1). For example 0.015 is eliminated every hour, independently of the drug concentration in the body.

For example, 1% of the drug quantity is eliminated per minute. Many drugs are eliminated by first order kinetics.

The time course of the decrease of the drug concentration in the plasma can be described by an exponential equation of the form:

The elimination rate constant λ can be calculated by fitting the data points during the elimination phase to a single exponential; yielding in this example a λ of 0.34 h-1. An alternative method (see Fig. 3.) consists in plotting the logarithm of the drug plasma concentration as a function of time, which will yield a straight line. The steepness of this line equals –λ. 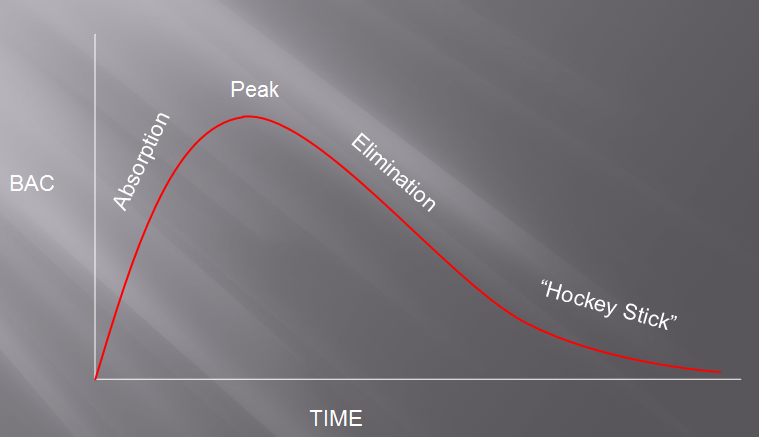 Further, even if all of the assumptions were known and proven, there is absolutely no scientific validity of using retrograde extrapolation with such a low BrAC even if the low BrAC is assumed to be correct. The scientific principle that allows in theory for retrograde extrapolation to happen is referred to as zero-order kinetics. In summary, zero-order kinetics means that the rate of elimination is independent of time or concentration. It will take a linear approach on a graph. For an adult male it is assumed that the rate of elimination is 0.014-0.021 per hour. Again, this is a massive assumption and requires the person to be post peak and also to be at a BAC above 0.04 to be safe. However and importantly, elimination rate at that low a BAC (lower than 0.02 for certain) is no longer governed by zero-order kinetics. It becomes governed by first order kinetics. Basically, what is known about ethanol pharmacokinetics is that higher concentrations the rate that ethanol eliminates from the body post peak is based upon a static amount for that person. Elimination patterns vary based upon genetic and philological factors. But is crucial in the Bieber case to know that when we get to lower concentrations of ethanol, this elimination rate is no longer uniform. It is no longer rate restricted. It converts to what is known as First Order kinetics. This is what is referred to as the “hockey stick effect.” At that low of a BrAC (even taken as proven and valid), it is absolutely impossible to validly use retrograde extrapolation to validly opine what his BrAC or BAC was at the time of driving.

Finally, any BrAC measurement in the pre-absorptive stage can overestimate true Blood Alcohol Content by as much as 230% according to one study. We care about the BAC measurement because it is the BAC that can be most readily converted to pharmacodynamic effect of ethanol.

Don’t just take my word for it. Even when we are not in the “hockey stick” rate of elimination, the scientific community says that this is bad stuff:

Here is an additional one:

Because there is a single analytical chemistry result in a DUID case and given the pharmacokinetic elimination rate of a given DUID drug is concentration dependent and are governed not by zero order kinetics but rather by first order kinetics or multiple order kinetic patterns based upon logarithmic features, it is simply not possible to generate a legitimate dose-concentration curve that will allow for retrograde extrapolation to a prior time.

What I have written before

I would suggest reading the blog series entitled “Pharamacology for Lawyers” and also “False Conclusions and False Convictions: Attempts of Elucidating Pharmacodynamic Effect from an Analytical Chemistry Result-How Solely an Analytical Chemistry Result in a DUID Prosecution Cannot Scientifically Support a Conclusion of Driving Under the Influence of Drugs ” In it I wrote:

The difficulty of opining with simply one data point of the provided analytical chemistry result at the time of blood draw back to the true analytical chemistry measure and the true pharmacodynamic impact at the relevant time of conduct (i.e., driving) concerns the interplay of pharmacokinetics of drugs that are not zero order kinetics as is true with EtOH. The pharmacokinetics of drugs other than EtOH involves a very complicated internal process of the body. Pharmacologists spend many years studying pharmacokinetics and dose-response. This issue of half-life and the steady state truly illustrate the danger of relying upon the assumption inherent in the quick reference charts that a certain measured amount of a drug is beyond the therapeutic range and therefore impairing.

What do prosecutors and state experts say on this

It is important to note the publications by the government and also prosecution written or targeted texts, not so much for their authority, but as information from what some would view as an adversarial source from me as a defense attorney attorney. Here is what they write:

Source: The Criminal Justice Systems: A Guide for Law Enforcement Officers and Expert Witnesses in Impaired Driving Cases: THE SCIENTIFIC EXPERTS:  Toxicologists, Crash Reconstructionists, Optometrists, and Other Medical Personnel (The full text of the NHTSA publication)

Scientific principle: Alcohol is eliminated at a fixed or linear rate (“zero order kinetics”), thus enabling a toxicologist, in many circumstances, to perform retrograde extrapolation (use a math equation to determine someone’s BAC a short period of time in the past, measured in hours, not days). However, the elimination rate of other drugs, depending upon their specific half-life (the period of time it takes the body to get rid of one-half of the substance) cannot be plotted on a straight line, but rather, is plotted on a curved line over time (“first order kinetics”). Drug pharmacodynamics—the processes of absorption, distribution, metabolism, and elimination—do not occur in set chronological fashion, one after the other, but rather, in combination with each other. Drug effects are also related to the timeline of drug use, will change over time, and may be further complicated by the presence of some active metabolites, which themselves will cause certain effects.

Simple analogy:5 A baseball dropped by a 10-year-old sitting in a tree house, high above the ground, will fall straight down (alcohol zero order elimination). With practice, the child might even be able to reasonably predict how long the ball takes to hit the ground (alcohol retrograde). If that same 10-year-old then drops a maple leaf attached to an acorn, it should hit the ground at about the same time as the baseball (other drugs with zero order elimination). However, what would happen if he dropped only the leaf, without the acorn? It will drop much more slowly—as it is tossed and turned in the breeze—than the baseball or the leaf with the acorn. The leaf’s size also changes during descent as pieces break off in the wind (changing drug half-life); this also causes its rate of descent to slow. Eventually the leaf gets to the ground, but not in a straight line nor in a predictable time frame (drug first order elimination).

In the courtrooms all across the US, retrograde extrapolation evidence in traditional DUI ethanol-based prosecutions are introduced in court, frequently over objection, without declaration of the assumptions that the opinion of BAC at the time of driving. Retrograde extrapolation evidence in DUI prosecutions for ethanol can be used legitimately if certain assumptions are known. Otherwise, it is a fool’s errand.

On the other hand, for DUID results, retrograde extrapolation cannot and must not be preformed and has no legitimate basis when founded upon one or even multiple analytical chemistry results. The elimination pattern of a single dose drug administration is not possible to determine. A multi-dose drug administration is even more difficult. If you add in the fact of controlled release drugs, it becomes beyond impossible. All attempts at retrograde extrapolation of DUID results is not simply a fool’s errand, it is a Faustian exercise by the analyst that may result in injustice and is beyond all doubt an act of science fiction.